Just seeing these two candidates run for president in the same dimension was strange to me. It felt like apples and oranges. Or apples and aliens.

Watching various politicians speak about Hillary Clinton and various celebrities cover Trump, it occurred to me that their two worlds (though fairly distinct up until now despite a shared tax bracket) were converging in a uniquely mind-boggling way.

It also occurred to me that I have somewhat unique access to a special pool of coverage, namely the academic record as represented by JSTOR. Admittedly, JSTOR  does not – by any means – represent the entirety of academic literature, but I think it makes for a fair sample size.

The heart of this project was a script I wrote to retrieve the anchor links from the HTML behind JSTOR’s Search Result pages. In that piece of html is the stable url. And in that is an article’s DOI. Collecting the DOIs from candidates’ search results pages, allowed me to connect them to the more proprietary data – including usage and discipline assignment. Though the larger part of my code and resulting work is proprietary, there are some points I can share here.

The corpus reflected in the results includes any article on JSTOR that references either candidate – even just once – throughout its content.

Below, you can see that, overall, Donald Trump referencing articles are accessed more frequently than those referencing Hillary Clinton. However, when that corpus is further limited to show only page one of the search results, Hillary Clinton’s sub-corpus is the stronger one. Looking at the candidates’ coverage across disciplines, I would guess that this is due to DT’s appearance across a wider scope of disciplines (e.g. Literature) than HRC. 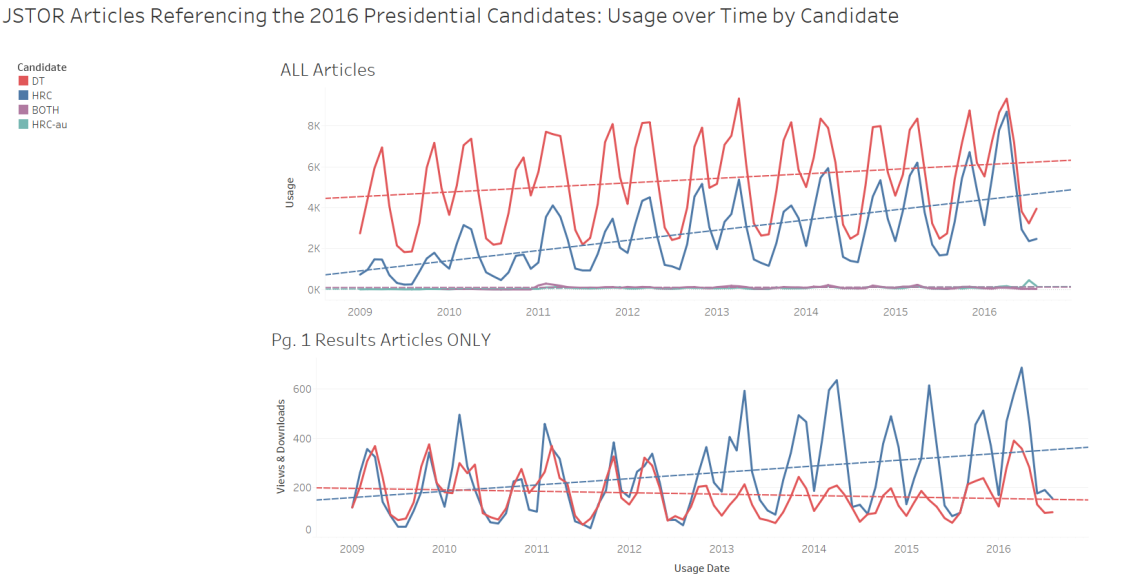 Another interesting gem of a discovery was in relation to the #1 top accessed article:

Published in 1991, the article examines Donald Trump’s aggressive reaction to the 1989 Central Park jogger rape case. On a hunch, I went to Google’s N-Gram viewer to research the term ‘intersectionality’. I was able to reasonably support a hypothesis that this was likely a seminal article of the field.

Lastly, perhaps just to lighten the room a bit, my results highlighted the fact the DT appears in more than a few rap songs. I had previously seen FiveThirtyEight make the claim that “Hip Hop is Turning on Donald Trump” based on an analysis of lyrics, and I thought it was interesting to see this discussion reflected in academic literature as well.

So, using every article in JSTOR that references rap / hip-hop and either candidate I created my own timeline version of a counter-argument that you can view by clicking the image below.